Campaign of the Week: “12 Days of Kinky Boots” Countdown Calendar

Concept: Launch a countdown calendar to get Kinky Boots fans excited during the holiday season with exclusive giveaways 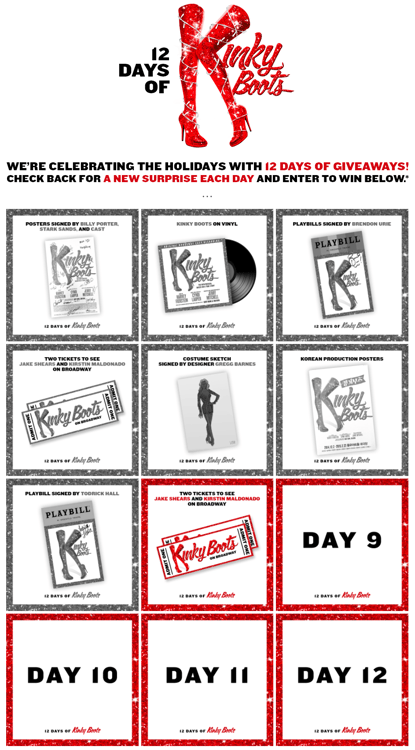 After sweeping the 2013 Tony Awards, Kinky Boots has proven it has lasting power on Broadway – and the hype and excitement around the show does not seem to be slowing down in 2017. The high-kicking Kinky Boots tells the endearing story of Charlie Price, who has suddenly inherited his father’s shoe factory, which is on the verge of bankruptcy. Trying to live up to his father’s legacy and save his family business, Charlie finds inspiration in Lola. A fabulous drag queen and entertainer in need of some sturdy stilettos, Lola turns out to be the one person who can help Charlie become the man he’s meant to be.

Since premiering in 2013 and walking away with six Tony Awards including Best Musical, and Grammy winner Cyndi Lauper has made history with Kinky Boots as the first solo woman ever to receive the Tony Award for Best Score, the show has amassed an ardent fan base, and loyal social following. To celebrate the show’s success and reward their fans, Kinky Boots launched the “12 Days of Kinky Boots” Countdown Calendar campaign to give their fans the chance to win exclusive prizes and experiences during the holiday season.

With a DCI score of 145, Kinky Boots’ “12 Days of Kinky Boots” deserves a standing ovation for their smart use of the Countdown Calendar use case to drive retargetable website traffic and boost fan engagement.

Kinky Boots’ DCI score is a combination of an Engagement Score (ES) of 275 and Virality Score (VS) of <25, and is a great example of a high performing campaign optimized to encourage engagement and repeat website traffic.

Check out more details below on how you can optimize your campaigns for engagement and virality.

The Kinky Boots team’s primary objective for this campaign was to drive engagement, and they did just that! This campaign is optimized to guide consumers to the campaign website and keep them engaged once there. If Tony Awards were given for exceptional campaign execution, the Kinky Boots team would be walking away with their 7th award for their “12 Days of Kinky Boots” campaign.

To learn more about Kinky Boots and view their “12 Days of Kinky Boots” Countdown Calendar, visit their campaign here.