Microexperience of the Week: Cat Footwear “Introducing The Intruder”

Concept: Build excitement and drive pre-orders for The Intruder, a new 90’s inspired shoe launching in March from Cat Footwear.

Objectives: Acquire new opt-in contacts/emails by enabling consumers to sign up to be the first to know when the new Intruder shoe will be available for pre-order. 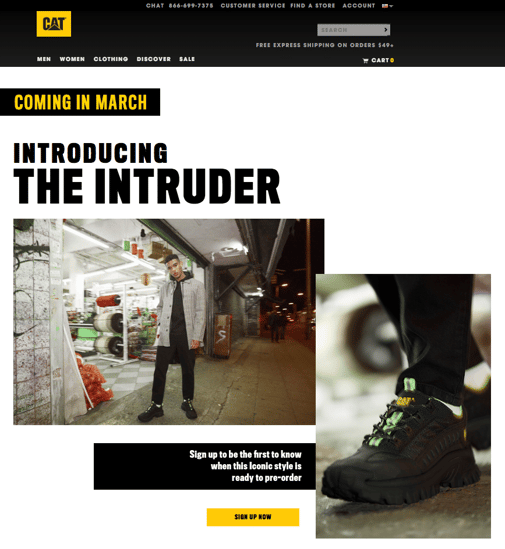 The current trend for chunky, overbuilt footwear compelled Cat Footwear to take inspiration from an iconic style from the 90's and create The Intruder: a street/performance hybrid chunky shoe that drops in March 2019.

To build awareness, generate excitement and drive pre-orders ahead of the March launch, the Cat Footwear team created a microexperience that showcases The Intruder, combining eye-Catching static and animated visuals and a compelling narrative. The microexperience, which is embedded on the Catfootwear.com site, also gives people a way learn when the shoe becomes available for pre-order and opt-in to receive additional insider info.

You can get a sneak peek at the Intruder here.

The Intruder microexperience reflects several best practices that contribute to DCI performance, including both Engagement Score (ES) and Virality Score (VS):

To see these best practices in action, check out the Intruder microexperience.