Objective: Encourage consumers to vote for their favorite influencer to drive engagement and build brand loyalty

Before HGTV took over our weekends and social media designers became mini-celebrities, there was TLC’s hit show, Trading Spaces. The concept was simple; two neighbors swap homes and two designers are pitted against each other to redesign a room in the other’s house with a budget of $1000. To see some truly head scratching redesigns, we encourage you to Google Trading Spaces + Hildi Santo Tomas. We promise you won’t be disappointed.

In a fun twist to the Trading Spaces formula, Evite has launched an equally entertaining digital version getting two popular influencers to go head-to-head to create a Friendsgiving party with a tiny budget and even tinier space. Evite teamed up with Sam Ushiro of "Aww Sam" and Jenni Radosevich of "I SPY DIY" for an Influencer Faceoff and the results are stunning. Check out the below video for proof!

Evite then asked their fans to vote for their favorite in a tug-of-war style voting faceoff. By voting, fans are entered for the chance to win a $500 Visa gift card, which they can maybe use to throw a $500 tiny Friendsgiving of their own. Evite’s approach paid off, drumming up solid levels of engagement with their campaign, and exposing their consumers to a wealth of great content and inspiration for throwing their own parties this holiday season. 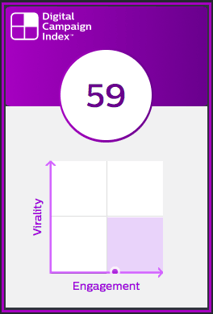 Evite’s DCI score is a combination of an Engagement Score (ES) of 114 and Virality Score (VS) of <25, and is a great example of a well-rounded, successful campaign. Evite’s “Tiny Party Friendsgiving” challenge benefited from their unique concept, strong brand tie-ins and a simple call-to-action for fans.

Check out more details below on best practices you can incorporate into your digital campaigns to increase engagement and social sharing.

Evite took the Faceoff use case and crafted an engaging and shareable campaign tailored to their audience. Their approach can be applied to multiple different digital campaign concepts from product launches to public relations campaigns.