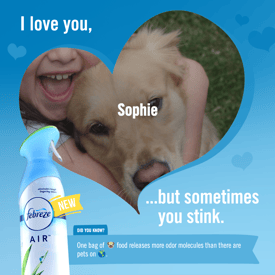 Template Used: Fill in the Blank

Instead of dancing around the issue in their latest campaign, Febreze hit it head-on: their product is used for smelly situations. Consumers were asked to embrace that fact by creating an #OdorOde: Using the new fill-in-the-blank template, consumers can upload a photo of something they love (but which stinks) and give it a custom caption. Though it’s only been a week since launch, it’s already clear that the campaign is making an emotional connection with consumers. Not every brand wants to associate itself with pungent aromas, but all can learn the following lessons: