Concept: For British Pie Week, Jus-Rol is challenging the British public to submit their best recipes to find the next best pie for the nation.

Objectives: Inspire people to bake with Jus-Rol and share their content across social. Leverage a creative, interactive microexperience to collect first-party data.

Use Case: UGC Contest with Voting 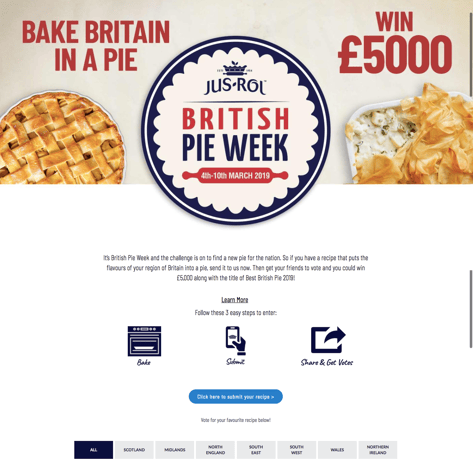 The Great British Bake Off took the world by storm, inspiring anyone will a penchant for a good bake to pick up a rolling pin and give pie baking go, in the hopes of creating a Mary Berry or Paul Hollywood approved recipe. Jus-Rol is giving all home bakers the chance to live out their Great British Bake Off fantasies with their own British Pie Week Challenge.They will be able to compete for the chance to be crowned Queen or King of Pies by sharing their own best bakes to be voted on by friends, family, and pie-enthusiasts.

The process for entering your best pie recipe is simple:

Check out their campaign and learn more about British Pie Week here.

Jus-Rol’s pie baking recipe contest is performing extremely well to date, with a DCI Score of 341, comprised of an Engagement Score (ES) of 213 and a Virality Score (VS) of 469. Their contest is a perfect example of how a brand can leverage voting capabilities to increase organic social sharing.

To see these best practices in action, check out Jus-Rol’s microexperience here.