Campaign of the Week: Skittles & Marvel’s Guardians of the Galaxy Comic Sweepstakes 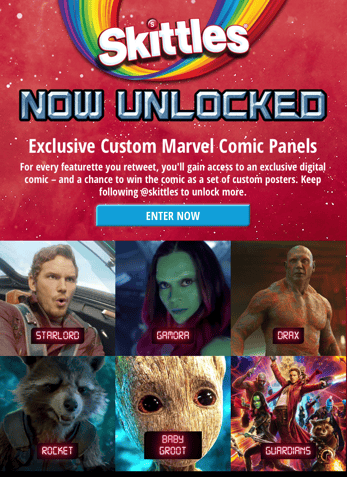 People aren’t just fans of Marvel; they often live and breathe for the fandom. The fandom is bae, some would say. Go to any midnight showing or Comic Con and you’ll see fans who have built their entire identities around their favorite series or character. It’s a marketer’s dream. The same could be said for Skittles – a brand with some fierce loyalists. Skittles were the only candy allowed in my 7th grade class per the direction of our teacher, a self-confessed Skittles head.

To get fans excited for the premiere of the Marvel’s latest blockbuster, Guardians of the Galaxy 2 Vol.2, Skittles launched a sweepstakes tailored to the type of rewards Marvel fans would get excited about – the chance to gain access to an exclusive digital comic and win custom posters. In order to win, fans were encouraged to share/retweet a video Skittles was promoting and opt into a sign up form on the campaign microsite, which included a Countdown Calendar unveiling a new character and comic to encourage fans to keep checking back. Skittles and Marvel made some great choices that you can incorporate into your next out of this world campaign.

Although the Skittles campaign has ended, you can still check out their campaign here and catch Marvel Studios' Guardians of the Galaxy Vol.2, in a theater near you!