Campaign of the Week: The Weather Channel's "It's Amazing Out There" Photo Contest

Concept: Amateur and pro photographer photo competition to highlight the most spectacular photos of nature, adventure and the elements

Objective: Encourage consumers to share their best photos with the Weather Channel for their “It’s Amazing Out There” Photo Contest

Use Case: Photo and Video Contest

Famed American photographer and environmentalist Ansel Adams said it best when he shared this photography tip: “Bad weather makes for good photography.” If there’s one photo genre we always find ourselves gravitating towards, it’s nature photography, and we’re confident that many of you would agree based on the number of nature shots shared on Instagram each day. 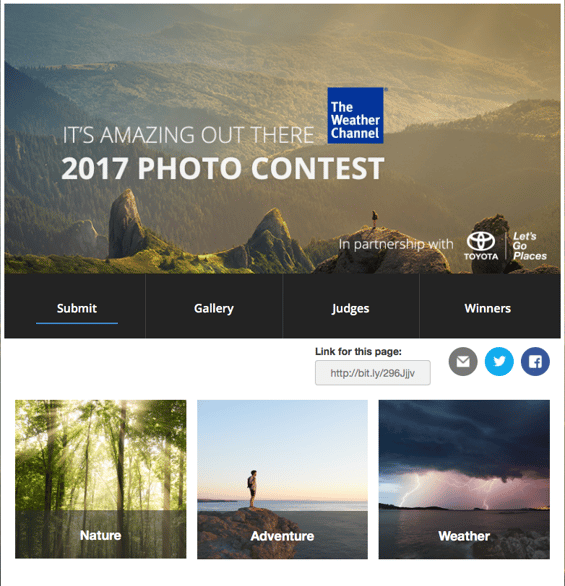 The Weather Channel understands consumers’ fascination with both nature and the weather, and taps into its underlying affinity network of photographers. While most of us run for cover during bad weather, these loyalists hustle outdoors to capture the perfect shot. The fourth annual “It’s Amazing Out There” photo contest, running through August 7, 2017, is a testament to that enthusiasm, and with a DCI score of 302, it’s clear that the Weather Channel team learned some valuable tips on how to execute a picture-perfect digital campaign. 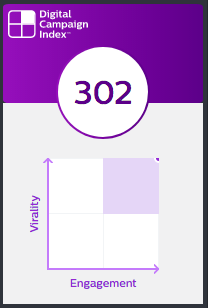 The Weather Channel’s “It’s Amazing Out There” photo contest is performing extremely well to date, with a DCI Score of 302, comprised of an Engagement Score (ES) of 321 and a Virality Score (VS) of 289. This is the fourth year that the Weather Channel built and is running its photo contest on the Wyng platform.

The campaign has such a high DCI Score partly due to the fact that they’ve applied learnings from previous years, such as streamlining the submission process and adding multiple photo galleries to maximize engagement, but it’s worth noting that the Weather Channel is seeing atypically high results. Most DCI Scores fall somewhere in the 0-200 range.

Check out more details on their mid-campaign Engagement Score (ES) and Virality Score (VS) below.

Not only did the Weather Channel capitalize on learnings from previous campaigns to optimize their Engagement (ES) and Virality (VS) Scores to drive a high DCI, but they also learned how to more effectively allocate media spend for this year’s competition, which can be tracked in the Wyng platform.

To learn more about the Weather Channel’s 2017 “It’s Amazing Out There” photo contest and the $15,000 grand prize, visit the campaign here.