Campaign of the Week: Blue Apron and Top Chef

Campaign Goals: Encourage brand engagement and sign-ups through a video sweepstakes to win the starring role in a Blue Apron Cooking Show 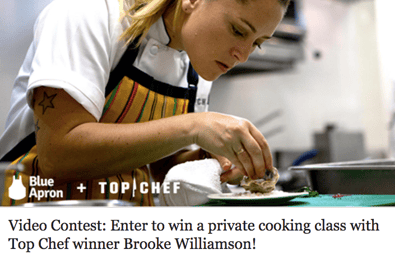 Blue Apron's food deliveries and step-by-step recipes allow anyone to cook restaurant-worthy meals. It makes sense, then, that the brand recently partnered with a reality show that celebrates all things culinary. On the most recent season of Top Chef, Brooke Williams won the title with her spice-rubbed pork with sweet red onion and black beans, which became the centerpiece of the brands' Star in a Blue Apron Cooking Show Contest. Consumers were asked to film themselves cooking that winning recipe, and the quality of the submissions speaks to the campaign's three key ingredients for success:

Not every Blue Apron customer will end up working in a Michelin-starred restaurant, but after participating in the Cooking Show Contest, they're one step closer to becoming a celebrity chef.