Fazoli, an Italian restaurant chain based out of Lexington, KY, knows that all good things come in pairs. So, the brand recently launched a promotion of two lunch items for $5 and paired it with a digital marketing campaign: What's Your Pick 2 Say About You? In exchange for entering their contact information, participants can choose two items from the available twelve and earn the chance to win two airlines tickets to anywhere in the continental U.S. Besides getting consumers to start thinking about their next meal at Fazoli, the campaign employed three mouth-watering techniques that every brand should take note of: 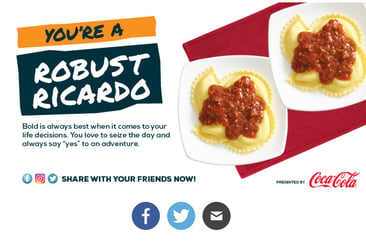 Fazoli's clever names, social media integration, and diverse target audience make the Pick Two campaign a success. The biggest deficiency is that visitors can only select two lunch items — though the brand recently launched a three for $7 campaign for all the Hearty Primos and Crisp Salvatores out there.