Concept: Launch a digital campaign in conjunction with the 25-year anniversary of Saturday Night Nick (SNICK)

Do you occasionally find yourself asking who loves orange soda? Or debating which animal you would choose to morph into? Or fantasizing about sitting around a campfire and telling the most terrifying stories you and your friends can think of? Then there's a strong chance you're an #80sKid or a #90sBaby and enjoyed the very best of Nickelodeon's programming: Kenan and Kel, Animoprhs, and Are You Afraid of the Dark?, among many other favorites. These shows originally aired as part of Nickelodeon's Saturday Night Nick (SNICK) in August of 1992. To celebrate the 25-year anniversary, the channel re-ran classic episodes at midnight every Saturday in August, and to hype the blast from the past and fully capitalize on viewers' nostalgia, the brand launched a viral and engaging social campaign with a DCI of 233. 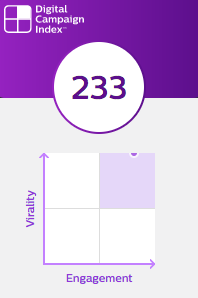 Nick's above-average DCI score is a combination of their Engagement Score (ES) and Virality Score (VS), and its success is due to a brilliant combination of design, execution, and promotion.

Not all brands have the benefit of a product that's as steeped in nostalgia as SNICK. However, every brand can use a variation of the best practices described above to make their campaigns engaging and viral.