Concept: Have basketball fans enter for the chance to win tickets to the first or second round March Madness games

There are a few more weeks before March Madness officially kicks off with Selection Sunday on March 11, but brands have already started building and publishing campaigns to get fans excited for the big games. One of our favorite campaigns that has launched ahead of March Madness is Reese’s “Experience the Sweet Taste of Victory” sweepstakes. To get consumers hyped before the games start, the Reese’s brand is collecting entries until March 2 for the chance to win tickets to either the first or second round March Madness games! While their campaign has only been active for a little over two weeks, the response from consumers has been massive and their slam dunk DCI score of 231 is evidence of that. 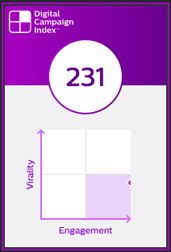 Reese’s DCI score is a combination of an Engagement Score (ES) of 382 and Virality Score (VS) of 81, and is a great example of a well-designed campaign geared towards maximum consumer engagement and email acquisitions. We are sure their campaign’s engagement score will only continue to increase as their sweepstake’s entry deadline approaches.

Check out more details on some best practices any brand can incorporate into their campaigns to optimize for engagement and virality.

To learn more about Reese’s campaign and enter to win those coveted tickets yourself, visit their campaign here.