Why the Original Snapchat Failed — And Why It Still Matters

After her freshman year of college, Deirdre Mills was back home in New Jersey, playing around on her new Macbook. Using a just-released program, she and her younger brother were taking pictures and changing the color scheme, and Deirdre's mom liked one of the photos so much that she printed it out and placed it in a wood frame. But, when she tried to give it to Deirdre, Deirdre refused. She thought it was "too dumb," so it's stood on a bedside table ever since. Had Deirdre's mom bided her time, learned to code, and capitalized on her photo-sharing instincts, she could have been a billionaire. But, in 2005, neither internet culture nor social media technology was developed enough for Photo Booth to succeed, and the story of its failure offers an important lesson for brands today.

In 2005, the technology required to take, upload, and share photos was cumbersome and time consuming. Since 2003, the front-facing camera had been available on the Sony Ericsson Z1010 but would remain underutilized and largely ignored until the iPhone 4 featured it in 2010. The most popular way to share photos was not social media sites, which were still an embryonic niche of the internet (by the end of the year, Facebook had only 5.5 million users and still required an invitation for high schoolers to join). Instead, aspiring photogs had to use flash drives or memory cards to upload their photos to sites like Flickr, which were primarily for storage, not sharing. Unsurprisingly, Photo Booth wasn't synchronized with social, but there was another major barrier to Photo Booth's success: internet culture.

It's easy to forget that the kinds of pictures Photo Booth allowed for in 2005 were ridiculed as melodramatic teenage nonsense. "The subject of the MySpace bathroom selfie—with its tableaux of bathroom counter, mirror, face, and upper body—always looked alone," writes Kate Losse in The New Yorker. "Selfies were for people without friends; the savvy moved on to more advanced networks." Facebook, both the user base and the company itself, tried to distance itself from the juvenile MySpace aesthetic with simple, clean profiles and bright, well-composed photos, hence Deirdre's refusal to take back to college with her that framed selfie (of her and her younger brother, no less). However, as photo-taking, uploading, and sharing technology improved, internet culture changed, and vice versa.

Today, selfies aren't just the most popular type of photography (over one million are uploaded every day), but they're also foundational for digital marketing, especially user generated content campaigns. Curiously, Apple, the company known for innovation and seamless UX, didn't connect the dots until it was too late. Photo Booth, updated with dozens of new effects, is now linked to email, text, AirDrop, Twitter, Facebook, and Flickr, but it's too little, too late. Last month, the company released Clips, a video-making app that copies the most popular features from Snapchat, Instagram, and Vine. If a software juggernaut like Apple is chasing the silly selfie trend, it's proof that the technology and culture of the internet have changed — but what does that mean for brands outside the technology space? 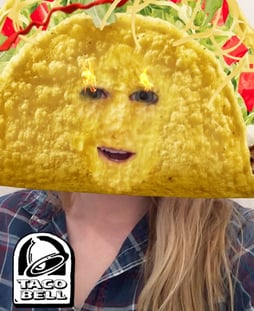 In the past two decades, the tone of the internet has changed completely. If 2005 Deirdre thought that a framed selfie was dumb, she would be horrified by 2017 Deirdre, who spends more time than she'd like to admit adding flower crowns, bitmojis, and Power Ranger uniforms to her selfies. Brands with a strong social media presence and a large potential customer base have already capitalized on this trend; for example, Taco Bell's 2016 Cinco de Mayo Snapchat filter, which transformed a user's head into a giant taco, was viewed 224 million times in one day or Daiya's "Make Yourself Cheezier" photo lab. However, not every company can traffic in zaniness. How does a life insurance company or a luxury watch brand engage in digital marketing without seeming staid and irrelevant?

The answer isn't immediately obvious, but the warning is: Internet culture shifts. Hologram filters and animations of pizza flying into your mouth may be hot right now, but 2029 Deirdre could be just as appalled by them as 2005 Deirdre would've been. All brands can and should take advantage of current viral trends — but they should make sure it isn't at the expense of their reputation.